Vadim Damier. Anarchism and Syndicalism: the «CNT model» and it dilemma

Preface from the journal "Heretic":

Despite a couple of brickbats thrown at Marxists by Comrade Vadim Damier (unjustifiably, from our point of view), and also despite a number of other fundamental disagreements with his position, we feel sincere respect for his call on his comrades in IWA-AIT to break firmly with reformism and consistently uphold the revolutionary line of proletarian anarchism. 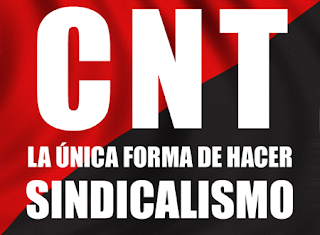 One philosopher has once told that the one, who doesn't study history, is doomed to repeat its errors. The problem consists just in looking for what was made may be not correctly or not very well in the past. This can give a possibility to avoid some mistakes in the present and in the future.

Of course, it would be unreasonably and conceitedly to give advices to comrades living in a country removed in thousands of kilometers, with quite other situation and with differing conditions of social and workers struggle. But when I turn around back on history of anarcho-syndicalist movement in Spain, I see not only brilliant victories and the Great Revolution, but also certain internal problems. And these problems remain the same throughout all history of heroic CNT.

The attempts of Bolshevist usurpation in the beginning of 1920s; the permanent discussions about participation in the politic; the cooperation of leading group of Pestaña and Peirò with oppositional politicians in the struggle against the dictatorship of Primo de Rivera; the Treintismo; the refusal of realization in July of 1936 of Concepto confederal del comunismo libertario adopted on Zaragoza congress; the “Ministerialismo” in the Civil War; the common front of “internal” fraction with authoritarian parties in the struggle against Franco in the 1940s and 1950s; the “Cincopuntismo”; the massive infiltration of the Reformists and then finally the splits which led to a creation of the CGT; and finally the actual troubles with the “heterodoxos” and attempts to force some of their most active critics out of Confederation…

So we can say that the CNT led through all its history a stubborn struggle against reformism. The Reformism was every time beaten but it emerged anew again and again. We never will cure this illness if we will not understand whence it arises.

There is a point of view that similar problems are inevitable for anarcho-syndicalism as such. That the anarcho-syndicalism acts in a cramped tension or “dialectical contradiction” between final goal and everyday achievements, between some “maximalism” and some “reforms”. That this way is very narrow, and so it is easy – or even “naturally”– to drive sometimes to some kind of “reformism”. But it is impossible to cure an illness simply declaring it “natural”: one day it can become deadly. Only the Marxists with their Hegelian schemes of “negation of negation” can estimate contradictions as the base of every development. The Anarchism seeks harmony as it goal, and this goal can be achieved only by the means of annihilation of contradictions and of restoring of harmony. An organism which is broken off by contradictions never can operate coherently, intelligently and purposefully. In the long term, it is doomed to defeat.

It is one of general principles of Anarcho-Syndicalism that, in this combination, the Anarchism is the goal and the Syndicalism is a mean. What is more, the anarchist workers movement or the anarchist Syndicalism is the sole form of MASS anarchism known in the history because it makes possible through the everyday concrete struggles to restore the solidarity and self-governmental capacity between people and to show them the perspective of a new live without hierarchy and domination. So the everyday syndical action is one of the best methods of achieving anarchist goals but no a value-in-itself for people which want to be free. Nobody in our movement doubt about it officially. But the reality looks sometimes differently…

OPENESS “TO ALL WORKERS”?

The peculiarity of the Spanish CNT was always a foundation of it strength and it splendid success. But it was also basis of some of its problems too – even although certain of these problems were “imported”.

Without making any deep voyages in the past, we remember that the Confederacion Nacional del Trabajo in Spain were found in 1910 on the crossing of two different traditions. The one sprang from the Spanish Regional Federation of the First International and it workers organizations: they had a clear and open libertarian goal, struggling not only for everyday betterments but also for a free and stateless society. The second tradition was of the French CGT with it Revolutionary Syndicalism based on direct action. The influence of this growing movement in the neighbour country was so big, that the workers associations in Spain abandoned even the former name of “Sociedades de Resistencia” and adopted the French name “syndicates”. Together with the French Revolutionary Syndicalism, some of it key notions traversed the Pyrenees: the openness of workers organizations “to all workers” independently from their ideas and social goals (an ideologically “neutral” syndicalism) and the view of a future society as a federation of syndicates rather than of the libertarian free communes (the key points of the Chart of Amiens of the French CGT).

But the significance of this CGT tradition was different for France and for Spain. For the France, the adoption of revolutionary syndicalism was an obvious progress because it appeared to be a rupture with a former domination of authoritarian Marxists in the workers movement. The Chart of Amiens was a compromise between the Libertarians, the authoritarian Socialists and the pure Trade-unionists, but it gave to the Anarchists for some time a very good possibility to extend the influence of libertarian ideas in the working class. But the Spanish anarchist workers movement didn`t need such sort of compromises. It was enough powerful itself.

The notions which were “advanced” for a situation in France created a confuse duality in Spain. The CNT adopted both things simultaneously: the goal of libertarian society and the openness of syndicates “to all workers”. A very serious contradiction was created: how a worker which refuses a libertarian goal can be only and simply “as a worker” a member of any organization struggling not only for the partial betterments but also for a libertarian society? This gave birth to a permanent problem in the CNT between the “anarchist” and the “syndicalist”(it would be true to say, more “neutral”-syndicalist) tendencies.

The principle of “openness” cleared the way in the CNT not only for Revolutionaries but also for Reformists “as workers”. This was supported also by some Anarchists which shared a “Malatestian” position in respect of trade unions: they didn`t consider the unions as a mean of struggle for a libertarian society and viewed them as per se reformist. From both the “non-ideological Syndicalism” and Anarchism of Malatesta resulted the “openness” to “all workers” and the pursuit of quantitative growth of number of members in anarcho-syndicalist unions, at high speed and almost at any cost. And the partisans of a “syndical structure” of a future society (as Treintistas) tried to convince that the bigger the anarcho-syndicalist unions will be, the nearer is the revolution.

But this “quantitative”, “numerical” approach has also some further logical results. To be bigger, the syndicalist unions must “soften” their ideas and become more attractive for “normal”, that is for no-revolutionary, “moderate” workers so as not to scare them. They must be more “heterodox”, less anarchist, less “ideological”, more ready for compromises with politicians and reformists. In other words: they must themselves become reformists. Since then, the “openness” and the forced growth regardless of “ideal quality” become the banner of all Reformist with damaged the CNT from within.

The more “anarchist” tendency in the CNT diagnosed the danger very quickly and they tried to repel it. In the beginning of 1920s, they showed an interest for an experience of anarchist workers movement in Argentina, FORA.

It was a notion of an anarchist workers organization which was in the same time syndicate and “ideological” association, or more correctly, a syndicate with clearly and openly defined anarchist ideas. There was no place for those who have fundamentally disagree with the anarchist social goal (as partisans of political parties), or who were simply looking for any “more efficient” trade union. It was a syndicat of “anarquistas y simpatizantes”.

In the face of political elusions of Pestaña and Peiró, quite a number of Spanish Anarchists and Anarcho-Syndicalists expressed in 1920s their sympathy for “forist” options. This can be read in the known book of Juan Gómez Casas about the history of FAI. But in the end, another option prevailed: to unite all anarchist affinity groups in the FAI and to try to act as Anarchists in the CNT for counter the reformist tendencies of “less ideological Syndicalism”. Now, we know, that this approach has only a limited success and only for a very short time. Moreover, it even reinforced the “anarchist – syndicalist” duality in the CNT and not solved the contradiction mentioned in the beginning. It there are “special” Anarchists in any organization, it supposes that the others (a large majority) are not.

The problem influenced obviously the destiny of the CNT in the Spanish Revolution and remains unresolved until now.

The actual situation in the anarcho-syndicalist movement (not only in Spain) indicates that this duality of anarchist tradition and of “revolutionary syndicalist” tradition of Chart of Amiens becomes a strong weapon in the hands of reformist tendencies. They seek to utilize it for struggle against revolutionary militants and unions worldwide, softening the “ideal” content, forcing the numerical quantitative growth of membership at cost of some “deideologization” of anarcho-syndicalism and imposing close cooperation with reformist trade unions and political forces. Their expectations are clear. We live in the situation of worldwide capitalist offensive when the big “official” reformist unions don`t want and also can`t organize the workers defense. The syndicalist reformists hope to take their place. But in the consequence of social atomization and of fuzzy workers class consciousness, they can recruit many people only refusing the “extremist”, “too revolutionary” and “too ideological” approach of revolutionary anarcho-syndicalism. Their aim is to become very “normal” trade unions (may be, a little more “radical” and persistent) without any goal of libertarian transformation of society. This would be a definitive return of “no-ideological syndicalism” to the Social-Democracy.

But the most of these hopes will be in vain in a long-time perspective. The “after-Keynsian” capitalism doesn`t need the persistent “social partners”; it need the destruction of organized labour, a capitulation. In this context, there are no place for the reformists which hope to coquet with own imaginary “radicalism”. To organize surrender, the big “official” trade unions are sufficient.

Without giving something for the workers, the reformist “deideologized” syndicalists can however kill the anarcho-syndicalist movement. Now, they throw off practically the old “duality” of anarchism and “openness”. Defending it, we will lose. We shall discuss new options, new alternatives in the anarcho-syndicalism. That is why the “forist” experience of real unity of anarchism and syndicalism and the “model” of anarchist workers organization can be useful in the actual situation.