Flooded New Orleans: who are the looters? 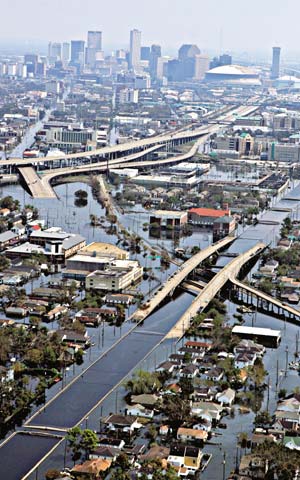 From the editorial board of the journal Heretic:

The following article is about the tragic events in New Orleans in 2005. Although several years have passed since this tragedy, we considered it necessary to recall these events because nothing has changed since then. Throughout the world people remain defenseless in the face of natural disasters solely because on the one hand the state impedes self-organization from below, while on the other hand it does not want to spend money to provide effective security for the population. Modern technologies and scientific achievements make it possible if not to make people completely safe from natural disasters then at least to minimize their harmful consequences. This shows that the chief problem facing mankind is capitalism and the state that guards it. This fact is clearly highlighted by the author of the article, Stephen Shenfield.


Flooded New Orleans: who are the looters?

A year after hurricane Katrina struck New Orleans we look at what was a media obsession at the time.

Moreover, the first purpose of "order" is to protect and enforce property rights. From this point of view, the main threat posed by disasters like Hurricane Katrina is not the threat to human life and health, to the environment, or even to the economy. It is the threat of "chaos," the threat to "order" and "civilization," but above all to property, arising from the temporary breakdown of government.

The "looter" symbolizes and dramatizes this threat, conjuring up images of Viking warriors on the rampage, barbaric violence, evil incarnate. Of course, these particular "Vikings" were all the more terrifying for being black. In the days that followed the hurricane, the media stirred up racist fears of the poor black people of New Orleans, spreading rumours (the fashionable expression is "urban myths") later shown to be exaggerated out of all proportion, if not completely unfounded. For example, in the week following Katrina the number of murders was average for the city (four) (see Ivor van Heerden and Mike Bryan, The Storm, pp. 124-8).

All in all, we shouldn't be too shocked or too surprised to learn that at 7 pm on Wednesday August 31, 2005 martial law was declared in the flooded city. Mayor Ray Nagin told police officers to stop rescuing people and focus solely on the job of cracking down on looters. This was just two and a half days after the hurricane made landfall and with thousands of people still stranded in attics and on rooftops.

In one typically heroic encounter, police officers chased down a woman with a cart of supplies for her baby, handcuffed her - and then didn't know what to do with her. All the jails were flooded. By the end of the week that problem was solved. A new makeshift jail was set up at the Greyhound bus terminal, with accommodation for 750 prisoners. This was the first institution in the city to resume normal functioning.

True, it could have been worse. After the San Francisco earthquake of 1906 people were shot dead as looters while foraging in the wreckage of their own homes (see G. Hansen and E. Condon, Denial of Disaster, 1989). Why did people loot? Or to use less loaded language, why did they take things that didn't belong to them without paying for them?

One man answered a TV interviewer who had asked him why he was looting by asking in turn: "Can you see anyone to pay?" The stores had been abandoned by their operators, but people still needed the things stored there. They needed food and fresh water, dressings for their wounds, new clothes to replace those ruined by exposure to the "toxic gumbo" of the floodwaters. Most of the so-called looting was of this kind - for the satisfaction of desperate need. In any sane society that would be a good enough reason for taking things.

Two paramedics from San Francisco who found themselves trapped in New Orleans wrote about the Walgreens store on the corner of Royal and Iberville Streets in the French quarter. The owners had locked up and fled. Milk, yogurt, and cheese could be seen through the window in the dairy display case, spoiling in the heat.

Should we expect the parents of hungry and thirsty children not to break in, even at the risk of being pursued by the police? Would they have been good parents had they failed to do all in their power to see to their children's needs? And what of store owners who choose to let food go to waste rather than give it to needy neighbours?

My first impulse is to wax lyrical about the sheer meanness of their behaviour. But probably they made no such conscious choice. As businesspeople they must have thought of the food and drink in their store not as products for assuaging hunger and thirst, but merely as commodities for profitable sale. If they could no longer be sold they might just as well go to waste.

There were looters who acted not just for themselves and their families but for the benefit of the local community. For instance, the young men who collected medical supplies from a Rite Aid for distribution among elderly neighbours. Or the man who distributed food from a Winn-Dixie store to the 200 or so people holed up at the Grand Palace Hotel. "He was trying to help suffering people, and the idea that he was looting never crossed his mind." 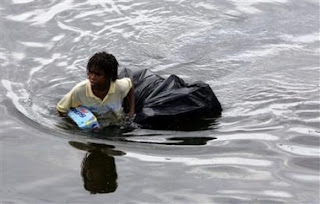 Socially responsible people of this kind are sometimes described as "commandeering" or "requisitioning" the goods they seize. That may well be how they view their own actions. In legal terms, however, only government officials, as representatives of duly constituted authority, have the right to commandeer or requisition property in an emergency. Private citizens who do so, whatever their motives, are engaging in theft and may be penalized accordingly.

Consider the feat of Jabar Gibson. This resourceful young man, purely on his own initiative, found a bus that was still in working order (the city authorities assumed that all buses had been ruined by the floodwater), took charge of it, filled it up with evacuees, and drove them to Houston.

This was the first busload of evacuees to reach Houston after the storm (at 10 pm on Wednesday August 31). The police were forewarned that a "renegade bus" was on its way; if they had intercepted it Jabar might have been arrested and charged with theft. Fortunately he was in luck: he got through to his destination, to be greeted by Harris County Judge Robert Eckels. Presumably his crime has been forgiven.

Of course, not all looters were responding to real personal, family, or community needs. Some were simply taking a rare opportunity to acquire coveted though non-essential consumer goods. For others looting (and shitting in) fancy stores was a form of social protest or "empowerment," an outlet for pent-up anger against the endlessly advertised world of affluence from which they felt excluded. Finally, there was a phenomenon that I propose calling "entrepreneurial looting."

Entrepreneurial looters gathered assets with a view to later sale. As they got stuff for free, they could sell at any price and still make a profit. For example, "urban foresters" went after valuable lumber. Other entrepreneurs sold looted liquor. The cases of large-scale organized looting by armed groups (their weapons also probably looted) that received so much publicity must, I think, have been of this character. Brinkley reports an interesting conversation between Lieutenant Colonel Bernard McLaughlin of the Louisiana National Guard and a man selling liquor at a makeshift bar. When McLaughlin tells the bartender he is shutting him down, the man replies that he is "just being entrepreneurial."

Why shouldn't he make some money? McLaughlin gets angry at this appeal to "true American" values. "This is looting. You looted that... That's a 15-year felony. That's a 3-year mandatory minimum sentence." The man submits and McLaughlin proceeds to smash his bottles one by one.

And yet the preceding account makes clear that McLaughlin's real objection to such bars has nothing to do with the provenance of the alcohol. He doesn't want the locals drinking alcohol because it makes them more quarrelsome and disorderly as well as further dehydrating their bodies. Would he have allowed the bar to stay open if it was selling - or giving away - only looted fruit juice, soda, and bottled water? Legally, however, looting remains "a 15-year felony," be its social consequences good or bad. Property is sacred.

The bartender might also have tried to point out in his defence that historically all capitalist enterprise is based on looting. Early capitalism looted land and other resources from peasants (in Europe) and from indigenous peoples (throughout the Americas and other colonial territories). The looting even extended to the kidnapping and enslavement of millions of human beings, such as the ancestors of most victims of Hurricane Katrina. Marx called it the primitive accumulation of capital.

Looting is as American as cherry pie; the looters of New Orleans are keeping up an old American tradition and should surely receive all due credit as good patriots. But it depends on whose possessions you loot, doesn't it?

When I wrote this article, I was not aware of a particularly sinister aspect of the media-fueled hysteria over black "looters" in flooded New Orleans -- the wounding or murder of a large number of black people, mostly young men, perceived by armed white householders, vigilantes, and police officers as a threat to white property. There were rarely adequate grounds for this perception. For instance, luggage carried by black people attempting to evacuate flooded areas and passing through white suburbs was often perceived as stolen loot. I learned about this from the chapter entitled "Murderers" (pp. 247-66) in Rebecca Solnit, A Paradise Built in Hell: The Extraordinary Communities That Arise in Hell (Viking, 2009).