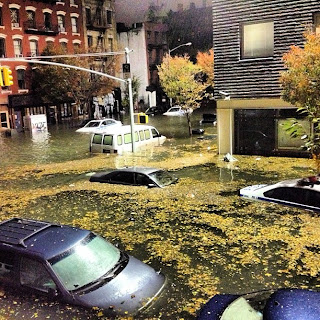 It’s now a week since Hurricane Sandy hit large coastal areas of the northeastern United States. At least a million homes were still without heat and power when a snowstorm followed a few days later. Relief has yet to reach some of the areas affected, such as the Far Rockaways, where survivors are fending for themselves as best they can.

True, some manage to fend much better than others. Holed up for the duration in a first-class hotel on the island of Manhattan, the business and cultural centre of New York City, David Rohde in The Atlantic(October 2012) dramatically contrasts the position of wealthy guests staying at the hotel with the plight of the hotel workers.

While the guests were somewhat inconvenienced by the blackout, they continued to receive assistance from the hotel staff – and also, in some cases, from servants they had brought along with them. The hotel workers were too busy looking after strangers to care for – or even keep in touch with – their own families during the hurricane. (I am reminded of the slave wetnurse in the Old South, forced to suckle her mistress’ child and neglect her own.) They were not even allowed a few hours off work to go home and make preparations for the storm. Workers in restaurants and garages were held captive in the same way.

Manhattan is one of the most unequal places in the world. Here the top 20% have forty times the average income of the bottom 20% ($391,022 as against $9,681 per year). But the extremes of wealth and poverty don’t usually crowd together in this way. Mostly rich and poor live well apart.

In American cities there is a quite close association between economic position and height above sea level. Traditionally, the wealthiest family in a town lives in “the house on the hill”, from which they enjoy a splendid view. The poorest, including most black people, are consigned to live in low-lying areas. These areas are especially prone to flooding. They also tend to be ugly, swampy, plagued by mosquitos, susceptible to smog inversions, and close to railway lines, abandoned industrial sites, toxic waste dumps and other “noxious land uses” (The Geographical Review, January 2006).

Even had the inhabitants of low-lying areas possessed the necessary resources, the swampy soil would have prevented them from laying firm foundations for their houses. (For this and other reasons, a rational socialist society will either drain low-lying swampy areas or leave them uninhabited.) The houses, built with poor-quality wood, could hardly be expected to resist the force of a strong wind. Brick and stone are not widely used for construction in the United States, except for the wealthy.

Economic position is associated with altitude in many cities outside the United States too – from Haifa to Port-au-Prince. Even where poor people do live well above sea level, it is in many places on terrain equally vulnerable to disaster – for example, shanty towns on unstable mountain slopes prone to mudslides when it rains hard.

Evacuate, but how and where to?

Some news reports complained that residents of poor areas “ignored” evacuation orders. But how were they supposed to get away without a car? And where were they supposed to go without the money to pay for hotel accommodation? City and state authorities issue orders to evacuate, but only rarely do they offer people any help to do so.

After the hurricane subsided, survivors sifted through the rubble of their ruined homes for any objects that might still be useable. Some looked for edible food items in bags that had been thrown out of a flooded store. Then they set off through the debris-strewn landscape in search of shelter and supplies, traveling as most refugees have always traveled – on foot.

And when they finally reached an area that had escaped the fury of the storm, they were greeted by signs like the one displayed by a trigger-happy householder in Nejecho Beach, New Jersey: “Looters will be shot, bodies thrown in river!” Just in case some refugee might be tempted for once to overlook the sacred laws of property.

Hurricanes and other tropical storms will become increasingly frequent and destructive and inundate larger and larger coastal areas. The scale of the impact of future storms will make Hurricane Sandy seem a minor event in comparison.

This is, first, because energy levels will continue to rise as the oceans and the atmosphere above them heat up. And second, because the sea level will continue to rise as polar ice melts. Due to the enormous inertia of the climatic system, this is so even if decisive action is soon taken to slow down global warming – a pretty long shot under capitalism, although conceivable in the context of a socialist world community.

New York City is considering the erection of movable sea barriers (“sea gates”). A project of this kind could in principle provide protection against storm surges for a few years. Whether the vast sum required for really effective defenses (estimated at $20-30 billion) will be allocated is another matter. In any case, the respite can only be temporary.